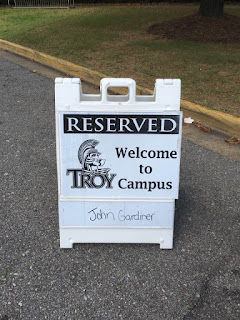 This was my second visit to Troy this year but John's first. We swung by ROTC in the morning to chat with them. We discovered that at Troy, ROTC is a minor which means even more credits added to an already packed Nursing schedule and requiring 10 if not 11 semesters even though scholarships are for 8. They do offer 15 housing scholarships each year that they share with AF ROTC. The ROTC scholarships do stack with university scholarships. She mentioned CLEPS as a way to get extra credits (had forgotten about that option). John was giving lots of reading materials as well as a Troy ROTC tshirt (Theresa is likely to try to steal it) and I was given some reading materials as well as an Army Strong coffee mug.
We then scurried off to our campus tour meeting first with the admissions counselor. We chatted briefly and then Destiny took us on our tour. There were supposed to be 4 or 5 families but the others all either cancelled or didn't show up so we got our tour by golf cart. Destiny showed us all around campus including the cafeteria, three different dorms, and we swung by the Nursing dept. Sigh --- while this is John's second choice for the actual university/campus, their nursing program is number three on his list. After the first semester of Nursing courses, most clinicals require a drive to other towns (50-60 miles each way) and that would not be a good use of one's time when you have the extra of ROTC already. And their labs on campus are very limited compared to what we saw at UAB. They have a great NCLEX pass rate (96%) but the opportunities for skills just doesn't appear to be readily available.
So it looks like UAB stays number one on the list.
Posted by Renee at 8:00 PM No comments: 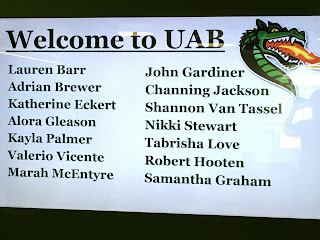 Today was our third college visit - this is the first time I've been on an official tour of UAB. The directions provided were easy to follow and the campus is just a short distance off I-65.

We started out in the Nursing Department. The UAB Nursing program is 5 consecutive semesters (typical of most programs in AL) and has a high NCLEX pass rate (about 97%). There is an early acceptance program for which John meets the requirements and all he would need to do is maintain a 3.0 GPA to maintain that acceptance. There is also a specific Nursing honors program that provides research opportunities. During one's freshman year, the required 1st Year Experience course provides shadow experiences. A&P has the unique opportunity of cadaver labs. We were able to tour the simulation labs --- lots of  'people' in hospital beds and body parts on tables. The new Nursing building (scheduled to open Fall 2018) will provide even more opportunities. There are five hospitals within walking distance for clinicals.

The Nursing tour ran long so we were a few minutes late for the overall campus introduction but I don't think we missed anything of importance. We were there for the info about scholarships - ROTC scholarships can be stacked with Academic scholarships. Two Trailblazers took us on a campus tour - it is way more urban than Memphis. We were told that jaywalking will cost one $180. Most of the campus is divided by city streets but there is a small park where student activities are held and a one block campus green surrounded by campus buildings. The new residence hall has two person rooms (carpeted, mini blinds) with standard furnishing, a private bathroom and kitchenette (mini fridge, microwave and sink).

UAB has Army ROTC; we ran out of time to run by there but we did meet a young man who was in it his freshman year (has a medical condition that prevented him from contracting). They PT twice a week at 5:45am and are one of the largest batallions in the southeast as they have students from many other schools in the Birmingham area. I had already asked Nursing about the summer courses as that's the same summer as ROTC training and the Nursing dept and ROTC are good about working out solutions.

Who knew that John would be a city boy? He now ranks UAB as his first choice and because of the unique cadaver lab opportunity, we are going to switch his DE class to our initial thought of Intro to Psychology.

Update Sept 2nd:
We met with Mr Garcia with ROTC on our way to visit Troy.  ROTC cadets can be placed together in Blazer Hall for living. Only maybe 4% of scholarships are 4 yr scholarships. If for some strange reason John doesn't get a national scholarship, he said don't worry call him as he usually can make something happen. For Nursing students, MS2 and MS3 years are swapped so that one can concentrate on their Nursing studies. Advanced camp (or whatever that summer training is called) is after sophomore year for Nursing students as they have nursing classes summer after junior year. Their batallion is over 100 cadets.
Posted by Renee at 8:00 PM No comments: 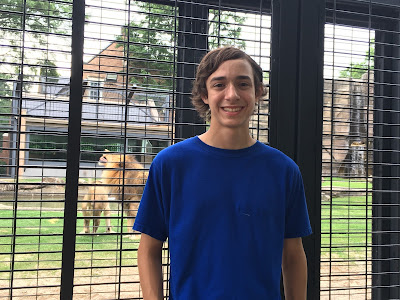 John and I went on his second college tour (I failed to blog about JSU) today  to University of North Alabama. It was technically Transfer Tour day but that worked out fine as we got a great info session from the recently retired Director of Admissions. We learned that you can stack a Leadership scholarship with an Academic scholarship.  She showed us a place on their website that shows the exact course equivalents for community college DE courses. She was just overall a positive first impression of UNA.

Then we went on a campus tour. Got shown all the pertinant places on campus (Starbucks, ChickFilA, library, brand new Science building, etc) as well as the college mascots - Leo and Una (yes, they live ON campus). Learned that the old science bldg is being torn down in Dec/January and in its place will be a brand new Nursing building (This is also going to increase their Nursing program by about 50%). Evan (our guide) also took us to the new freshman dorms since they don't bring transfer students there obviously. The rooms are a decent size, carpeted, mini blinds, and private bathroom. Each floor has their own common area with a big screen TV as well as Study Rooms. Laundry is free for students in the dorm.

We then met with Col Atencio and a brand new LT Nurse. They gave us lots of great information and encouragement. Learned a new tidbit --- when John applies in June 2017, the PT test is 1 min of situps, 1 min of pushups and a 1 mile run (all that doubles for the real thing). John even got an ROTC tshirt.

And he likes UNA!
Posted by Renee at 6:46 PM No comments:

College Applied to and Accepted 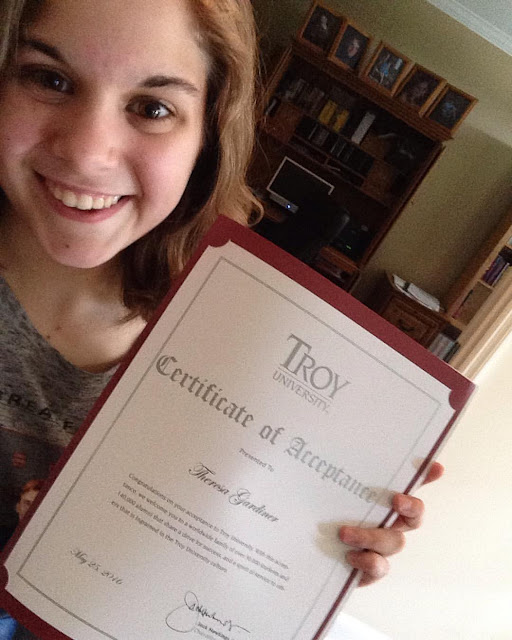 Gotta love a student who applies to college and is accepted before her senior year of high school even begins.
Posted by Renee at 3:53 PM 1 comment: 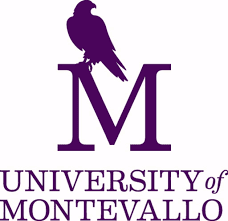 On Wednesday,  Theresa and I drove to the University of Montevallo for a college tour. It's a small school - about 3,000 students. It was a bit odd that unlike UNA, the Admissions Counselor didn't sit down with us individually. Our tour was one other student (a male athlete), his dad and us. It's a small quaint campus so I think freshman fifteen has the potential to occur. I must say my brain is mush and since I didn't take notes I have limited details. The campus is not far off I-65 but there is pretty much no town that we could see. The dorm rooms didn't have carpeting, each room may have a fridge or microwave (not both) unless you rent from the university at $80 a semester. Even if you bring your own, you must pay $10 for a sticker each semester/year (not sure which). They have a nice gym with workout room and waveless heated indoor pool (not that Theresa is interested in athletics). Their applications do open on June 1st --- earliest I've ever encountered. Their student/faculty ratio is 17:1 which is great for students but not for the checkbook. 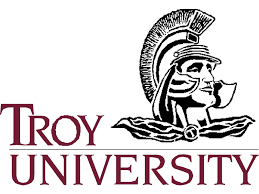 After our tour on Wednesday we continued to head south and spent the night in Troy. We got up on Thursday for a 10am tour of Troy University. This is the first college tour with Theresa at a school I've not previously toured. It is an absolutely gorgeous campus. The academic buildings are arranged around a beautiful quad complete with a fountain. There were lots of students out and about as it was a beautiful spring day. We met with an admissions counselor. Theresa mentioned that although she knew no current students at Troy, she did know that a member of Newsies had attended. The counselor not only knew of him but had been in Intro to Theater with him when she was a student. We were shown dorms (although not the traditional style) and they were all nice. Students are permitted fridges and microwaves. In one room I also saw a Keurig, crockpot and toaster oven (my gut says these are contraband). There is no way I'm paying for my child to have a single room with a full-size bed and a mounted flat screen tv.  But I am willing to pay a little extra for her to live in the Newman dorm. They have suite style - two bedrooms (for two students each) with a living area and a shared bathroom. And on the first floor is a small Blessed Sacrament Chapel. There is Mass on campus on Sunday nights in Sorrrell Chapel. The Newman dorm and chapel were not a part of the tour but Matthew took us there when the tour was complete.  We saw classrooms---- from the small upper level to a 'large' lecture hall of 120 seats (enrollment is capped at 110). The campus is very diverse and is large enough to have activities for everyone.  It's downside is it's more than 4 hours from home but other than that I loved it. Plus Theresa will earn a full tuition scholarship. Just FYI, they do superscore for scholarships.

If I think of other details, I will come back and add them. 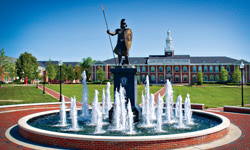 1. a narrative telling the adventures of a hero or a family
2. St Albert the Great Academy

Most books and other products reviewed on SAGA are received free of charge from bookstores, publishers, Blog Tour groups, publicists, or directly from authors. While I generally try to acknowledge the person or company who sent the product, sometimes I forget. It is generally safe to assume I did not pay for the books or other products I review.

I am an Amazon Affiliate. That means that if you click on most of the Amazon links on this blog (First WildCard requires me to use their links) and purchase something from Amazon before leaving their site, I get a small commission.